Translation after a while! Bakaleya6 crosstalk from the newest WU. This was a fun one. The company keeps teasing us a lot again, it seems. Idk what's going on and am a bit afraid of what's going to happen but w/e, I'm going to enjoy B6 again as long as it lasts. 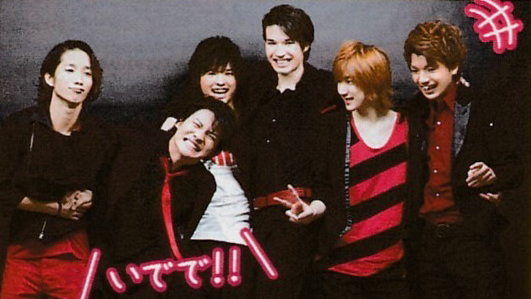 Lol, I did say that I'll enjoy this as long as it lasts. WELL, the Shokura recording reports came up while I was writing this entry and seems like we'll get more Bakaleya in next month's episodes. they did a medley of songs they also sang in J's party. AND wore Kisumai's glittery tracksuits, my hearrrrtt ;__; ♥ SIGH.

Hello, long time no see! It's new year and we're soon over with January already! Crazy. My second and last semester in Gaidai starts next week and I'm both excited and a bit scared at how close June suddenly is. :x But well, not time to think about that now!


I was in Tokyo last weekend to watch Gamushara J’s Party shows. I once again bought a ticket before we even knew the performers, but I got lucky this time, too. I went to see the first show on 23rd and the evening one on 24th. I already tweeted some stuff but wanted to write about the shows a bit more, especially about the stuff we probably won’t be seeing on the TV show later. I also wanted to share a recording of Shintaro's Snow Prince for those who are curious :D

I happened to have one Taiga translation done and sitting in my folders, and now it's perfect time to post it! Shin/Reia from the same mag as a bonus, I found their crosstalk fun.

Alsooo, Ninjani movie came out today, finally! Will watch it later, I have been waitinggg XD

But, on to the translations~

Hellooo, long time no see! I've been so busy lately that I haven't really had time to do any fun fandom stuff, apart from trying to desperately keep up with Gamushara, Shokura, KisuBusa, SZ Channel, etc.
BUT. I've also tried to make more freetime for myself, mostly to be able to translate things, and have actually managed to do something! So except a translation bunch soon! :D

Before the ones I've been working on, I had to quickly translate this new Hokuto/Taiga crosstalk from January's Myojo. There was quite a commotion among the Japanese Bakaleya fans the other day when people read this, and after reading it myself, I decided to translate it because it's rather interesting.

They share their feelings and thoughts on this group of six called "Bakaleya".

Gamushara Natsu Matsuri's still going on, and team RA was against SHA today, and they won two matches out of three! :3 I'm happy, it was kinda regrettable that they lost all against GA the other day. And apparently their performance today, especially during the very last show, was great, they had added some new tricks there on their own (and without asking their sensei... XD) I so wish we could see the performance on gamushara! ;;

ALSO, they talked about these matching yellow good-luck bracelets they've been wearing on the shows, which turned out to be made by Taiga. That all was just so cute that I decided to translate the tidbits about it here, since twitter's incovenient with the character limit.


I collected the whole story from various users' tweets, so this is all based on their preceptions of course.

When Juri started talking about the bracelets and told that Taiga had made them for everyone, Taiga was all embarrassed and like "stop iiit!".
After one practice, Taiga had suddenly said "can you come here for a second?" and at first Juri had thought that Taiga would tell them he wants to give up the double dutch or something. But, while looking a bit shy, Taiga had taken the bracelets from his pocket and been like "Here, I made these...". He'd made one for each member and their sensei. During the show, Taiga was all modest and like "they're quite messy". But the whole team was showing their bracelets all happily.

Then, the new tricks they did today!
Shoki (+ Shin?) did this thing called ロンダート, idk what it is in english. It looks like something between a somersault and a backflip? He did that while the others were turning the rope(s).
Shintaro did his usual 台宙 / flip/somersault from the high platform and apparently he timed the jump so that he landed perfectly within the turning ropes?? IDK if I got it right, and orz I can't explain it, let's hope we'll see this on the show eventually! 8D But it sounds super cool and apparently everyone were really amazed by it. And right after Shin had done it, Hokuto came and hugged him tightly and they all looked really happy <3

Also, apparently their sensei had said Shintaro's trick is too risky and hadn't given them a permission to do it. Even still, Shin had practiced and polished it and waited for a good moment to show it to everyone. Today, their sensei was absent and even the staff-san had tried to stop them from doing it but. So much for that! XD


Tomorrow are their final two matches against MU. >_< Crossing fingers for as great performances as they did today!
Can't wait to finally see their performance on Gamushara after reading dozens and dozens of tweets about them. ;_;

posting a translation i originally meant to post on shintaro's birthday but then lost my motivation with it halfway. but now, two weeks later, i decided to finish it anyway since i found it interesting and sort of important too, esp shoki & shin's parts because they talk a little about what it's like to be something else than skinny as a stick in johnny's.
(oh how i'd like to rant about how the default JE image is so screwed up if guys like shoki and shin have to feel like they're a wrong kind or worry about their figure etc >_>; but no, shutting up. ONWARDS.)

firstly, it's magic birthday today! :D happy birthday, brat! 17 sounds so little and so much at the same time! XD; orz. but i hope he has a nice day and nice year ahead with lots of work with his favourite junior nakamas. ♥ (give him a drama role for a change? u_u)

happy birthday to hasshi, too~

i wanted to do something for the bday so i translated the newest B6 interview from august potato :Dv i've really enjoyed the amount of these six lately with gamushara j's party and all. <3

but, on to the interview. they talk about secrets and confessing and the gamushara live.

as i was happily freed from writing wakamono, i started translating stuff for fun because i finally had time to do so! and these finished nicely for hokuto's birthday, yay. HAPPY BIRTHDAY☆

i was supposed to do only the hokkushin one but then i thought that hokku/taiga/shoki's parts on WU were kind of interesting, sooo! here you go.

rorychan was kind enough to scan the Ninjani pages from Cinema Square, so I thought I could translate the talk. Here you go~

Ninjani! Mirai he no tatakai 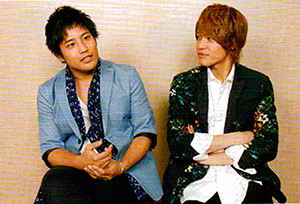 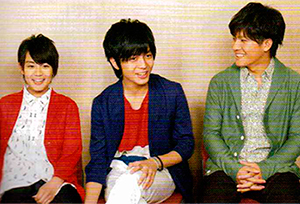 I wanted to translate something after a while, so have HokkuTaigaShin's interview from latest WU. Plus Jesse's bit as a bonus, because I found it interesting.